A question I’m frequently asked is this: What is the ideal cost per action?

The answer is, as low as possible, and I’ll tell you why.

CPA As the Better Metric

One thing you’ve probably seen before is the concept of penny clicks. Penny clicks are clicks, in CPC marketing, where the cost per click is only a single penny, which is typically about the lowest you can get. Some ad networks will let you get even lower, where a fraction of a penny gets you a click, but that’s typically only for ad networks that operate in a currency that’s weaker than the USD.

You’ve probably also seen articles like this one about why penny clicks typically suck. If you’re not familiar with the argument, it’s quite simple. When the action you’re seeking is a click, it’s easy to get. If you pay $1 and get 100 clicks, that seems great. Then you look at your analytics. What did those clicks get you? 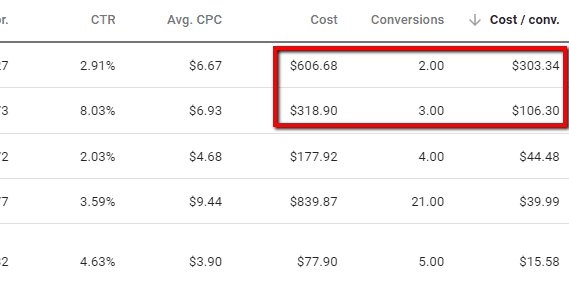 This is why there’s a widespread caution against penny clicks. There’s an “ideal” cost per click, somewhere significantly higher than one cent. The exact actual ideal cost per click might be 30 cents, or 50 cents, or $1, depending on the industry and the audience.

The thing is, that’s for CPC, not CPA. CPA is a better metric, because the action is something you care about. Instead of a click – which is basically valueless if it doesn’t lead to anything further – your action is something tangible. Something that has real value to you. A new social media follower is valuable. A new newsletter subscriber is valuable. A new customer is extremely valuable. These actions are important enough that you can even assign a monetary value to them if you want. 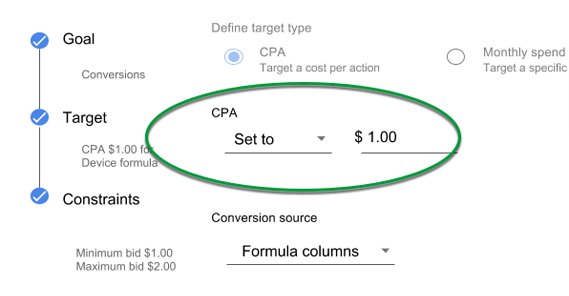 Since the A in CPA is an action you care about and that has value, the C, or Cost for that action, can be as low as you can push it. If you get penny actions, well, you’re probably doing pretty well for yourself. Imagine running ads where you pay one single penny for every new product sale you make. You’d be ecstatic! Your sales team would throw a party because they found the platonic ideal of marketing.

Thus, the ideal CPA is as close to nothing as you can get it.

Now, it’s possible that with some kind of actions, you still run into the click problem. For example, social media followers might not be valuable to you if they aren’t qualified followers. A lot of the shady third party follower sellers are selling bots or people in networks that exist only to follow pages, and they don’t do anything afterward. So you do still need to pay attention to the quality of the action you’re getting. After all, that action does still need value.

How should you actually go about calculating your cost per action? Typically, you need to harvest some segmented data and do a little math. Here are your considerations.

First of all, the basic CPA calculation is very simple. Take the total cost of your marketing efforts in a given time, such as a week, a month, or the duration of a specific campaign. Then find the total number of new actions you received during that same duration. Cost per Action, so take the total cost and divide it by the number of actions, to receive the cost per action. 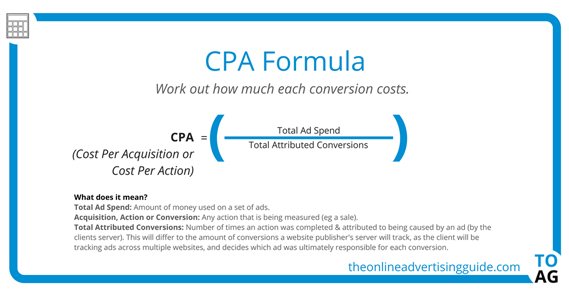 Now you have to remember that you rarely have one single CPA. You can calculate one CPA for everything you’ve done across an entire quarter, if you want, but it’s not likely to be a very useful number. No, you need to segment your data down.

Second, figure out the different channels you’re using. This is relatively easy; just look at what ads you’re paying for. One business might be paying for Facebook ads, Google ads, Twitter ads, and ads on a local TV affiliate.

Now you have an array. You have combinations of each of these factors you can calculate a unique CPA for. For example, you have all of these calculations:

And so on. Each combination of action and channel is a unique CPA.

You can get even more granular. Let’s say you’re running three different ad campaigns on Facebook. One is a standard long-running content campaign, one is a campaign focused on some timely piece of news, and one is a seasonal campaign. All three of those can have their own CPAs. 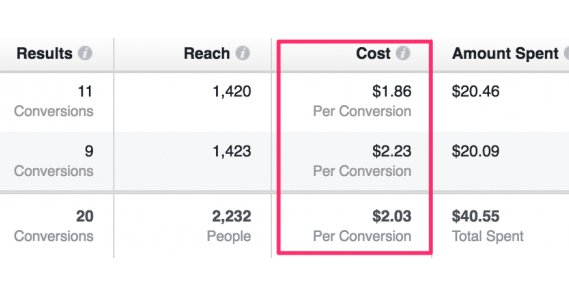 You have to decide how granular you want your data. I recommend getting as granular as possible, and then using aggregate data when you want a broader look at your overview.  This gives you the best of both worlds.

And, of course, the CPA for each channel and each action can be improved in its own ways. The methods you use to optimize for newsletter subscribers will be different than the ones you use for getting new social followers, which will be different than your sales pushes to get new leads. The more granular your data, the more levers you have to pull to optimize. More options means more testing, more testing means more optimization, and more optimization means lower costs per action.

Now, I know I said that a lower cost per action is better, but that’s not entirely true. You need to find the right balance between a low CPA and a high action volume. Getting $0.01 per action doesn’t help you if you only get one new lead out of it. There will be a sweet spot between getting more actions and getting cheaper actions. Thankfully, pretty much all of the methods you have for lowering the cost per action are also was to improve the quality of those actions, and as such aren’t likely to make your number of actions drop significantly.

Focus on improving audience targeting. The accuracy of the audience you’re targeting is important for lowering costs. Platforms like Facebook and Google have a ton of different ways to optimize your audience, from demographics to interest targeting to geographic targeting. You need to figure out the key attributes of the people you’re trying to reach, and then optimize your targeting to reach only those people. The fewer non-interested people in the audience, the less wasted money you have in your quest for actions.

Improve your landing page experience. When a user clicks on your ad, what faces them? Are they on your home page? A blog post? A product page? A landing page? Optimizing your landing page experience is a crucial part of lowering your costs. Remove obstacles that distract users who land on the page. Make the page clear and its goal as focused as possible. Make sure the page loads quickly and works on every platform. There are a bunch of levers you can pull here too. 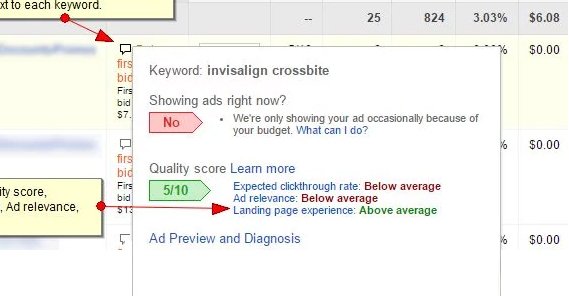 Improve your conversion process. If the user is interested in converting, what stops them? Some aspects of your conversion process can be smoothed out to improve customer flow. Are you asking for too much information on a subscriber form? Do you lack the normal trust indicators for a payment page? Are you asking for sensitive information without using SSL? Identify reasons a user might find to stop the purchase process and smooth them out.

Track multiple goals for a single click. Just because a user clicks on an ad you aim at new subscribers doesn’t mean it has to stop at measuring new subscribers. Some of those people might go on to complete other actions as well, and you can calculate them in different parts of your cost equations.

Pay attention to quality score on platforms that use it. Both Facebook and Google have quality scores they maintain. These scores serve as an indicator of various metrics – which metrics specifically depends on the platform – and can affect the costs and conversion rates for your ads. You want to learn the factors that go into them, monitor them to see where you stand, and work to improve them as you run more ads.

Rotate ads when they start to get stale. Ads lose their effectiveness over time, as people start to see the more and more, and as they start trying to reach people with less and less engagement. This is when you should rotate your ads. Change the copy, change the value proposition, change the targeting, whatever, just rotate them. Make sure there’s generally something fresh and new for people to engage with for maximum value.

Always be testing. One thing you should simply never stop is testing. Always have variations on different ads running, and calculate your CPA for each variation. This gives you an idea of which ads and which changes are performing well, and how you can improve other ads as you go.

And, of course, your ideas.

Those of you who are experienced in CPA improvements, what have you found most effective? Share with the class and you may end up cited in a future post!

The post How to Find the Ideal Cost Per Action on Google Ads appeared first on Growtraffic Blog.