Running ads on YouTube gives you an entirely new – and entirely massive – source of traffic. Where you send that traffic is up to you. YouTube ads can send visitors to your website landing page, to a mobile app download, to a product page, or even to another YouTube channel.

How can you get the most out of YouTube ads? Let’s start at the basics and build our way up.

First up, you have TrueView ads. TrueView ads are the standard type of ad on YouTube, if you can even give them a description of the sort. They’re videos you produce yourself. You can choose to make them unskippable, in which case you are limited to 15-20 seconds in length. If you allow them to be skipped, they can range from 12 seconds to 6 minutes long. 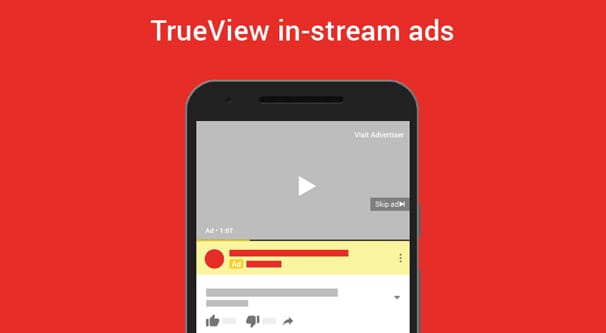 TrueView ads come in two forms: video discover and in-stream. Video discovery ads are the typical display ad style. They show up in the search results, in the video sidebar, and can be a recommended ad video. In-stream ads are the typical pre-video commercial style ads. They can appear on YouTube directly, or on any video in the Google Display Network.

The second form of ads are Preroll ads, which are video ads that can play before, in the middle of, or after a video on YouTube. There’s some overlap between these and the in-stream TrueView ads, for sure. Preroll ads can appear in the middle of any video over ten minutes long. 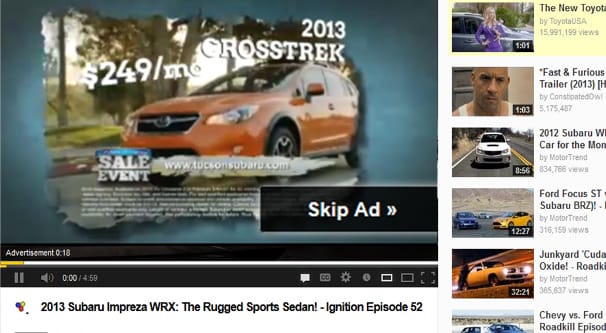 Preroll ads can only be set as unskippable, and they only list 15-20 seconds. They’re subject to a typical PPC auction style.

The third type of ad is the Bumper ad. Bumper ads play before a YouTube video and are limited to 6 seconds long. They’re too short to really dig into any significant content, but can work well for brief awareness campaigns.

Interlude: The Costs of Advertising

Before we get too much further, we should discuss the costs of advertising on YouTube. All YouTube ads are PPC ads, where you end up paying when the user clicks on the ad or follows your call to action. In the case of some TrueView ads, you pay if the user watches a significant portion of the ad rather than skipping it as soon as possible, as well.

Ads on YouTube will generally run you around 10-30 cents per click. I’ve seen similar cited figures on several sites, though I haven’t done too much YouTube advertising on my own recently. You can also expect around $1 per 1,000 views for CPM ads, though CPC is generally better for YouTube. 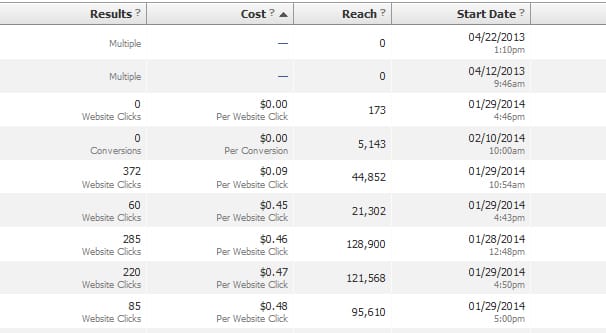 Certain types of ads also have minimum buy-ins, or minimum daily budgets, as it were. TrueView in-stream ads require at least $20 in budget, while other types might require $10. You can even buy a “channel sponsorship” and dominate the advertising on a specific channel for a $1,000 minimum, depending on the channel.

Now, this is the pure cost of running ads on YouTube. You have to remember, though, there are other costs associated with video advertising. You probably know what it is, but if you haven’t thought about it, I’ll remind you: it’s the video.

When you’re running video-based ads on a video-based platform, you need to invest in your video. A short, compelling ad video will require proper production. You might need to buy software to edit videos, or pay for the services of a video editor. You’ll need the appropriate resources to capture your video, be it a screen capture program, a CG rendering engine, or a decent digital camera. You also need to have the time or money to create your script, refine and edit it, and get it produced. Hiring actors can add more to the costs.

Obviously, one video can last for a long time with ads, but remember that ad campaigns grow stale. You can’t produce one video and expect it to last forever. Ad campaigns have a turnover anywhere from one to six months, and a lot depends on your niche and competition. You don’t want to be the stale one in a crowd of fresh new content.

Setting Up Your Ads

Once you’re ready to start your campaign, by which I mean you have produced your video, you need to get things working. You need to upload your video to YouTube – unlisted is fine – and then make your way over to AdWords.

Within AdWords, you need to create a new campaign. Choose the video type and ad type, and name your campaign. Set your ad type: do you want it to aim for views/awareness/conversions, mobile app installs, or product shopping? Shopping, for the record, goes through the Google Merchant Center, not just any form of storefront. If you’re not using that particular Google system, you won’t be able to use that type of campaign. 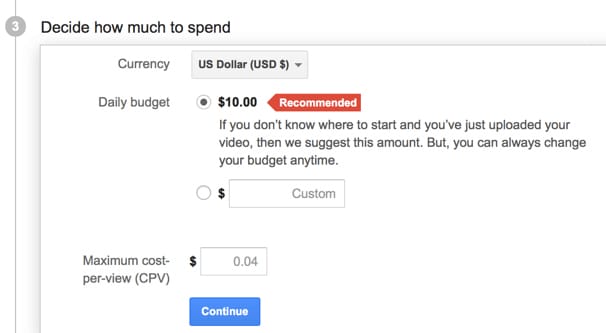 Set your budget. Since you want to keep your costs low – that’s why you’re reading an article with “cheap clicks” in the title – you want to set it relatively low. I recommend using standard delivery, since Accelerated delivery is going to dump your whole budget in a matter of a few hours in the morning, and isn’t ideal for most forms of advertising.

You’ll be asked to choose or exclude specific geographic locations from your ad campaign. If you want the absolute cheapest clicks possible, you can target somewhere like India, where you’ll get clicks as low as a penny each. Of course, that traffic is largely valueless to you. I recommend targeting as narrow a geographic location as you can, and excluding all of the countries outside of your service area. If a person outside of a given area can’t convert, don’t show them the ad.

The next set of relevant targeting options is device and platform targeting. Let’s say you’re advertising an iOS app. You should eliminate desktop devices from the running, and focus on the mobile market. More specifically, you also want to eliminate Android and Windows platforms, to focus solely on iOS, both through phones and tablets, which are separate sections in the AdWords system. 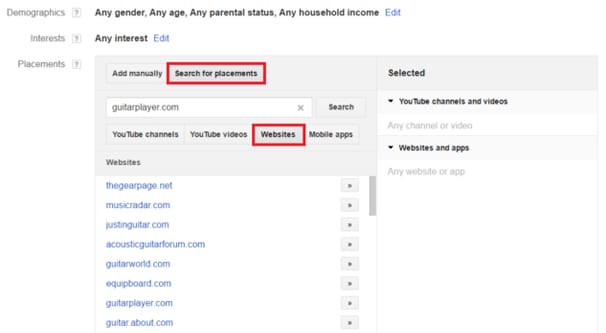 Again, the narrower your targeting options, the lower your costs will be. It’s very rare that you drill down to a very narrow audience that is nevertheless still very expensive.

It can be worthwhile to add further restrictions, such as time of day, to encourage your ads to run during specific hours where you’ve found your highest converting audience to act. When you set a narrow time band for your ads, you can dump more money in a shorter amount of time with little or no repercussions.

Most of the rest of the settings in AdWords will be typical of any kind of web advertising, so you can just plug in the same sorts of targeting data you use for display ads or search ads.

Finally, you need to link your AdWords and YouTube accounts. Without linking the two accounts, you won’t be able to use your video as your ad. You can’t just pick some random video to use as an ad, after all. Linking your accounts ensures that you have control over both and is a security measure as well.

First up, you need to track everything. The more data you have on hand, the more aggressively you can tweak your ads. When you know something is underperforming, you can kill it off and replace it with something else. 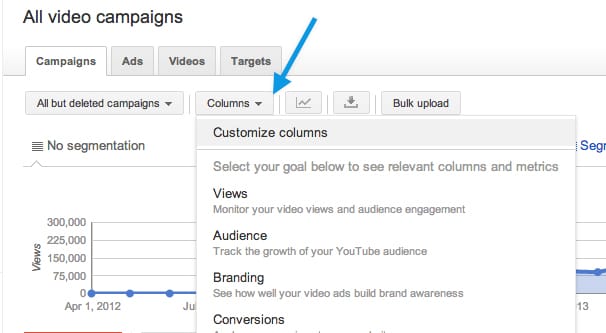 I highly recommend segmenting your budget and your ads into as many different ads as you can maintain. Each individual ad can be a test of some aspect of your campaign, be it targeting, video editing, length, placement, or budget bids. The more tests you have running, the more aspects you can tweak to see what works. Every so often – depending on how long it takes with your budget to get relevant data – collapse the worst performing ads, expand your budget in the best performing ads, and start new tests.

Video ads are video, so of course your video needs to be properly compelling. You only have less than 30 seconds for most ad types to make your point. Do some serious study of television commercials and other video ads, and figure out what makes people want to click on your ads specifically. Remember that you actually only have five or so seconds to capture attention! After that point, the user is free to skip the ad in most cases, so you need to make sure you’re keeping them around as much as possible.

In addition to that, your video needs to be high quality in both visual and auditory fields. Take your video with a high resolution camera or by rendering in high definition. Make sure to upload your ad at 1080p – 4K is not necessary yet – so it can be properly downscaled as necessary. Make sure your audio is crisp and clear, professionally recorded, and free of noise. Nothing kills an ad faster than poor audio. 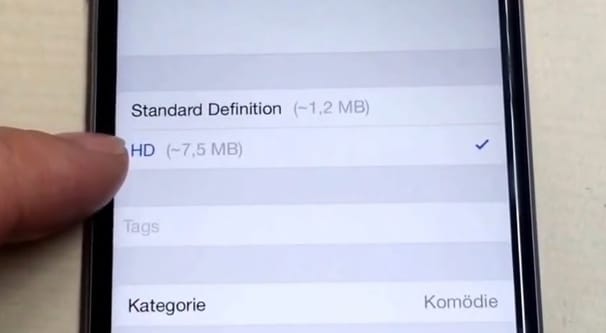 Make sure you have a compelling call to action as well. You want people to click on your ad, which means you want to keep their attention and give them a reason to click. You can’t simply tell them to “click here, now, do it do it do it!!!” and expect them to listen to you. The only brand that might work for is Old Spice, frankly.

It can be useful to use YouTube ads to drive traffic to an intermediary, as well. YouTube ads can direct users to another video on YouTube. This second, longer video gives you more time for information, more flexibility for a call to action, and can gain you secondary benefits like ad revenue, subscribers, and engagement. I figure it’s worth testing this out, though it won’t work for everyone.

I also highly recommend adding a captions file to your ad video when you upload it. Closed captions are important for any video media these days, and while it won’t hurt you in terms of budget or pricing, having captions available helps you gain conversions more easily. 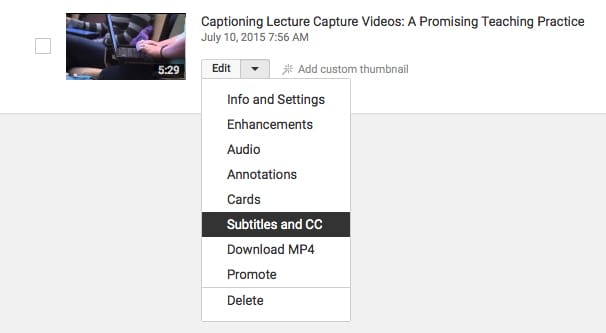 You can also make use of remarketing. For one thing, when you have an older campaign and are looking to start a new one, you can export your remarketing list from the old one and use it as a target audience for the new one. This will show your ads preferentially to the people who already engaged with the older campaign.

You can also use negative remarketing. If you want to expand your audience beyond the same group of people, set your remarketing list as a negative list. This forces the campaign to only show your ad to any given user once, making your budget reach to as many people as possible. It’s not always the best option, but it’s an option to try if you want to shake things up. Both options are in the “shared library” section of the AdWords campaign, under video remarketing.

As you grow more and more practiced with your video ads, you’ll be able to decrease costs by starting from a more optimized position. Eventually, you’ll reach a sort of peak of value per dollar, at which point it’s generally time to find a new campaign.